Routing AxeFx III Computer Audio to Out 1L/1R and Out 2L/2R.

Normally, the computer Playback outputs called OUT 1 and OUT 2 send audio to the OUT 1 left and right (L/R) jacks. USB playback is mixed in after all processing, combined with any signals generated on the grid. In other words, computer audio added to the sound of your guitar preset. This is designed so that you can use a single pair of speakers connected to the Axe-Fx III and hear both your processed guitar AND computer audio playback such as a backing track.

Some people use the Axe-Fx with a mixer and instead wish to use Out1 L/R for processed guitar, and out 2 L/R  for computer audio playback. This is possible in two different ways.

1. Computer playback outputs  3 and 4 are "hard-wired" to Axe-Fx III Outputs 2L and 2R. If you can force your application to send to 3 and 4 instead of 1 and 2, this immediately produces the desired result, with guitar audio at 1L and 1R, and computer playback at 2L and 2R.

2. Some computer audio programs, however, can only send signal to the first pair of computer playback outputs.  A special parameter allows you to "re-map" computer playback outputs  1 and 2 so they go to Out 2L and Out2R instead of the usual Out1 and Out2. This is a global setting found in the I/O Audio menu called USB Output Mapping. Change it so 1/2 go to OUT 2 and you will have achieved the desired result.

If you want to play back computer audio to Out1 L/R and Out2 L/R at the same time.The way  to do this is to manually build custom presets to route audio on the grid. Use Computer playback outputs 7/8, which go to something called the "USB INPUT BLOCK". If you have a Mac then go to Audio/Midi Setup in Utilities (Mac) and change the AxeFx Audio speaker configuration to OUT 7/8.

In the scenario below you can see the preset sending audio to the OUT 1 block. You can also then see the INPUT USB block sending computer audio to both OUT 1 and OUT 2 blocks. Then use cables on the grid to send this to both the OUT1 block and the OUT2 block as shown in the following example: 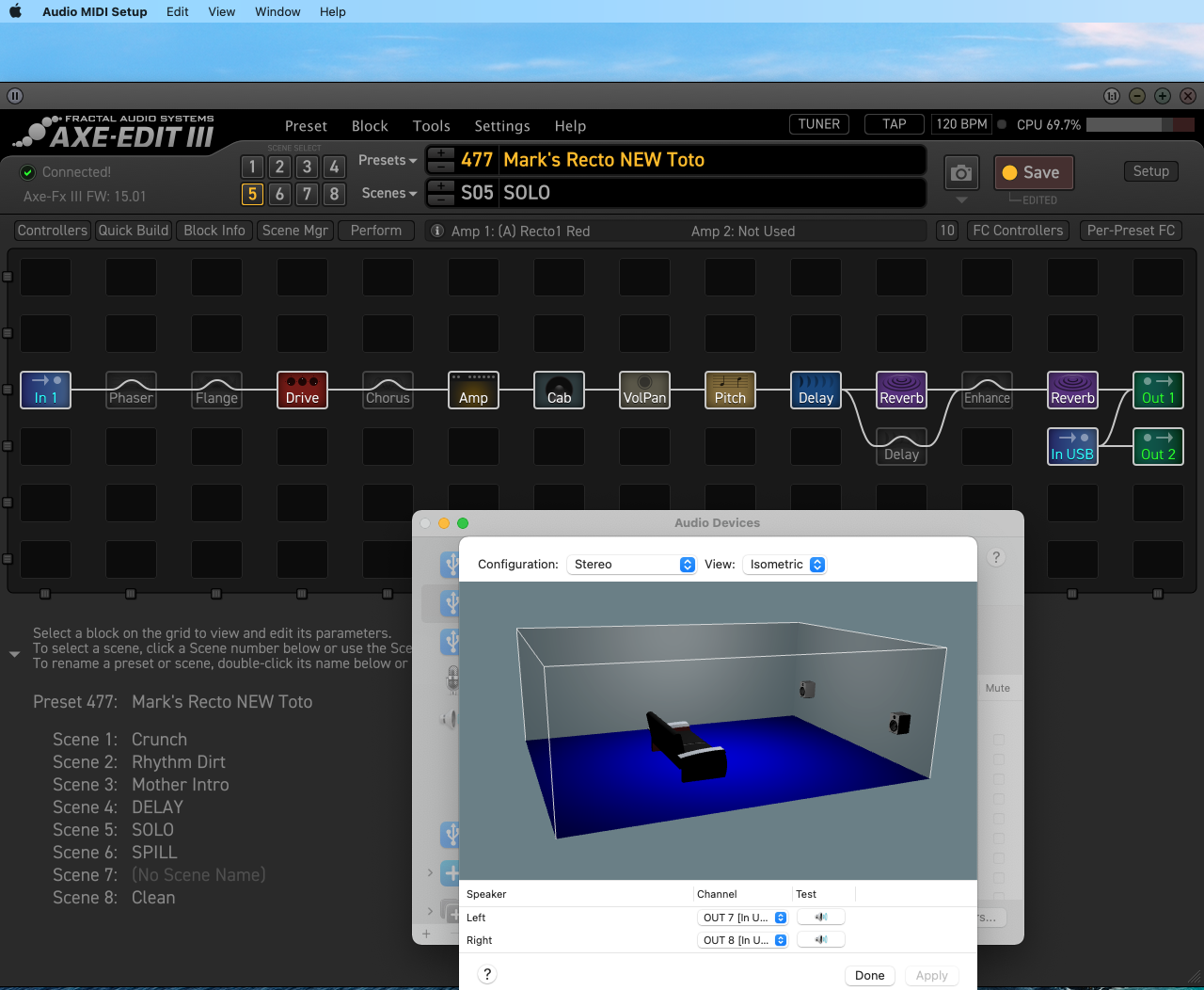 Choose files or drag and drop files
Was this article helpful?
Yes
No

Comments are disabled for this article